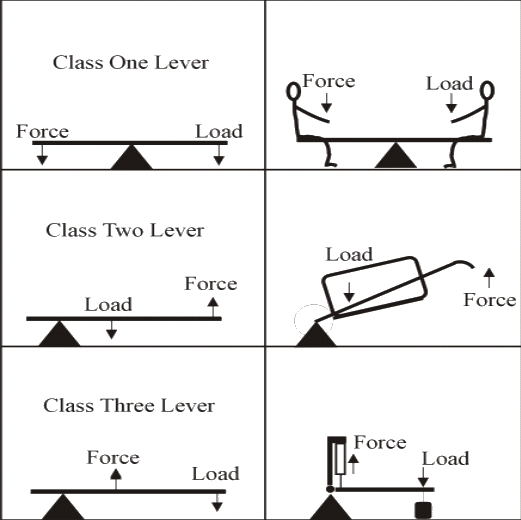 A lever is a stiff rod that rotates around a pivot (or fulcrum) point. Downward motion at one end results in upward motion at the other end.

Depending on where the pivot point is located, a lever can multiply either the force applied or the distance over which the force is applied.

Levers are classified depending on the position of the fulcrum.

All types of levers present in the human body:

Levers are used to transfer a force from one position to another. They may be used to multiply forces,change the direction of the force required or produce turning effects (torque). Examples of commonly encountered levers are: wheel barrow, see–saw and pliers. The lever has three parts:

To have a mechanical advantage greater than one, the load must be closer to the pivot point than the effort is.
The turning moment (torque) of a force on a lever equals (force applied) × (distance from pivot).
For a balanced lever, the sum of anticlockwise moments = the sum of clockwise moments.
The turning moment of a lever = force x distance it is applied from the pivot.