Julius Lothar Meyer Julius Lothar von Meyer was a German chemist. He was contemporary and competitor of Dmitri Mendeleev to draw up the first periodic table of chemical elements.
Meyer's 1864 textbook included a abbreviated version of a periodic table used to classify about half of the known elements. In 1868, Meyer constructed an extended table which he gave to a colleague for evaluation. This table unfortunately was not published until 1870, a year after Mendeleev's table was published.

A German chemist, Julius Lothar Meyer in 1869, was looking at physical properties of elements along with their valence states. He made a table that contained a preliminary tabulation of 28 elements. The table showed how the integral valence changed as the atomic weight of elements increased.

If the atomic volumes of the elements were plotted against the atomic weight, a series of peaks were produced. The peaks had alkali metals: sodium, potassium, rubidium, and cesium. Each fall and rise to a peak, corresponded to a period like the waves. In each period a number of physical properties other than atomic volume also fell and rose, such as valence and melting point. The adjacent figure shows the curve obtained by Lothar Meyer when he plotted the atomic masses and the respective atomic volumes.

Hydrogen, the first in the list of elements is a special case and can be considered as making up the first period all by itself. The second and third period in Meyer's table included seven elements each, and duplicated Newlands law of octaves. 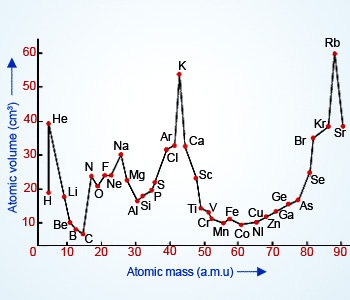 However, the next wave had more than seven elements. The third wave had about 17 to 18 elements. This clearly showed where Newlands law had failed. One could not force the law of octaves to hold strictly throughout the table of elements, with seven elements in each row. After the first two periods, the length of the period had to be longer.

If we see the atomic mass versus atomic volume curve, we will notice the following features:

Meyer published his work in 1870, but before that Dmitri Mendeleev has shown a neat version of how elements can be arranged in periods and the periods increased with atomic masses. Mendeleev retained Mayer's observation that ‘H’ is an exception to the periodic behavior.

Meyer is best known for the share he had in the periodic classification of the elements. He arranged the elements in the order of their atomic weights, they fall into groups in which similar chemical and physical properties are repeated at periodic intervals, and in particular he showed that if the atomic weights are plotted as ordinates and the atomic volumes as abscissae, the curve obtained presents a series of maxima and minima, the most electro-positive elements appearing at the peaks of the curve in the order of their atomic weights.